I went here over five years ago (May 2004) after playing with my orchestra at Sandy Lake Amusement Park in Carrollton, Texas (suburb of Dallas). After the event and a day of fun, we went to a nearby mall, where we ate dinner. I got a guide to SimCity 4 Deluxe Edition here, a meal at Burger King, and a smoothie from Frullati Café. Regrettably, an Orange Julius was here, which I did not try (grrr) and I do not recall the interior much (it wasn't anything special).

But I DID get the directory, which I have faithfully scanned here.

Apologies for the wrinkly paper (I could have used Photoshop but I don't have Photoshop).

The listing of stores is also in black and white (it was originally the green on the front, but an automatic setting made it B&W) 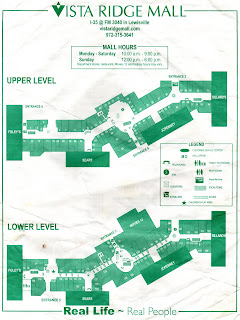 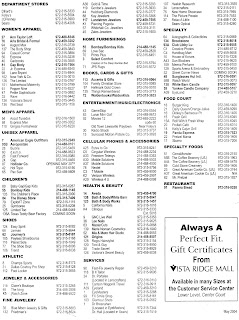