The Mall of the Mainland

Originally published August 12, 2008 Update: Sorry for the delays. I lost my flash drive, then the power went out, but here we go. And then after the Olive Garden came The Mall of the Mainland! I heard had heard of the Mall of the Mainland...the DeadMalls.com entry and the Labelscar entry, but never had I actually been inside the beast. If I was looking for a great place to shop or hang out, MotM would be terrible. But if I wasn’t, then the Mall would be interesting indeed. While the outside was cool, the inside was less than. Although the demographics weren’t all that bad...maybe 50% black and 50% white, it wasn’t very crowded. This was on a SATURDAY NIGHT and there were just a few dozen people in the mall, most of them teenagers, and punk-looking ones at that. The weird thing about the Mall of the Mainland is about a third of the tenants are flat-out empty: either blatantly or disguised with goofy postcards and fake storefronts. 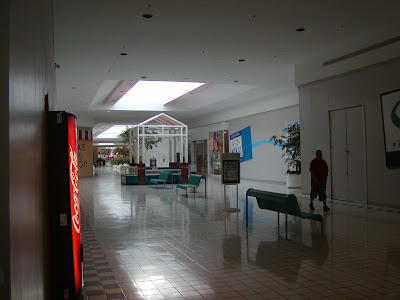 Although it's really not that dark, you can see how empty it really, really is. Another thing I should tell you is that Mall of the Mainland abounds with architectural treats: fountains, neon, and preserved fronts. A closed storefront reveals, for instance, a J. Riggings storefront from nearly a decade ago. 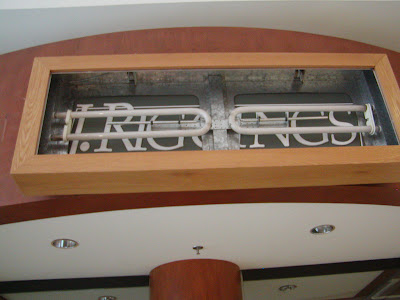 The second third consists of stores that you’ve never heard of, and the last consists of chain storefronts, but they’re really dated. If you wanted to see a neon “Tilt” sign or a Bath & Body Works storefront with the pink-and-white awnings, then MotM is the place for you. 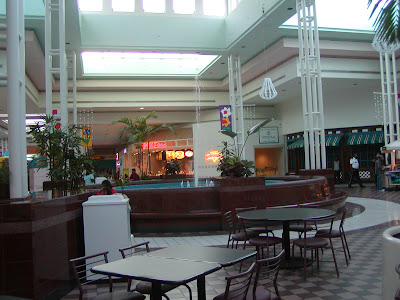 Now, the food court, as you can see, is pretty interesting. Although it has a nice, fountain, the food court is pretty unappetizing. While at most food courts, you can expect a Chick-fil-A, a chain burger restaurant of some sort, Sbarro, and so forth, at this one, you can find an unappetizing lineup. The only chains are Corn Dog 7 and Subway, while other restaurants include a snack bar called Hello Josephine, a fairly generic pizza parlor, and a really nasty-smelling burger place called Red Cap Express. Most depressingly, the kiosks don’t offer anything but blingy jewelry and cell phone cases. If you wanted to buy a cold coffee dessert or a pretzel, you will be disappointed. There was something going in the food court, but it wasn’t a chain restaurant and was either a local venue selling Asian food or smoothies. One of the two. The vacant space to the right was apparently "Café Milano". 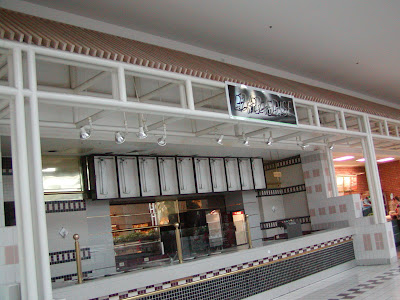 What the heck is Paradise? Beats me. 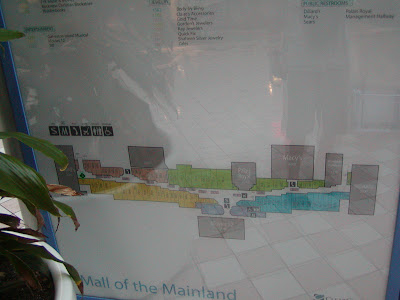 The mall was a dumbbell, with Dillard’s on the east, Sears on the west, the cinema in the back, and the JCPenney and Foley’s facing forward. However, JCPenney has been gone for a few years and Foley’s is Macy’s now. 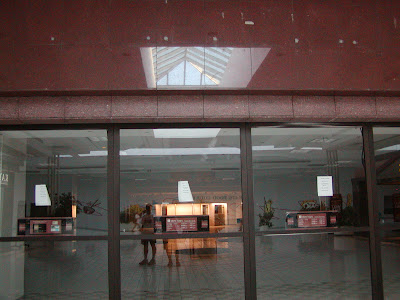 The vacant JCPenney, having been closed for nearly three years. To make matters worst, I really was kidding when I said two-thirds of the mall was occupied. In reality, it’s around 25% occupancy at best. There’s all sorts of bizarre stores...a store with oversized plastic body piercing jewelry outside, a store called Dollar World which really reads as “$ World”, and a generic Hot Topic-like store called T-Body and Monogramming. There was a large store called Affordable Furniture, and a store called All Shoes $9.99 appeared to be closed...it really was a sad, sad place. The mall is packed with teenaged hoodlums of many races and I felt nervous because I had a camera with me. And especially in the entrances, there was a strange smell throughout the mall. I almost want to say chlorine, but it’s not right. 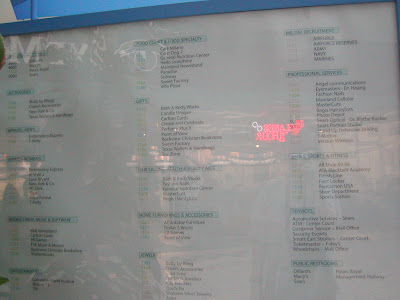 The out-of-date directory. It was a real shame, though. Such “deader malls” should be a quiet place to hang out, rife with interesting specialty stores and services. The food courts of deader malls should be small but still fairly appetizing. I’m referring to Sunrise Mall, here, by the way. Interesting stores in question, would include, say a model railroader’s club.  One idea would be to knock out the entire mall sans the movie theater, Macy’s, Dillard’s, Palais Royal, and Sears while building up a nice “lifestyle center”. While it’s a sound idea, the area around the Mall of the Mainland is hot and always humid. Not the best idea. Since Mall of the Mainland is the closest to the Galveston beach and is really meant to be “family-oriented”, it can, in theory, get its act together. It’s still got a Tilt!, a fountain, and a movie theater. With the right tenants oriented toward a blue-collar demographic, all-new attractions, and better security, Mall of the Mainland can be a hero once again. It’s not that easy, though. The area is full of half-empty, low-rent strip malls (Hobby Lobby, anyone?) and the Houston area is very overmalled. Any “cool” stores, even “destination” stores have been snapped up by the many enclosed and outdoor malls around, including Katy Mills, The Galleria, and so forth. Plus the location is absolutely horrible, and that doesn’t help. Still, it would be a shame to see it go. Minus the thugs, the depressing quality and selection of storefronts, and the smell, Mall of the Mainland is a bright, colorful place with plenty of character and even a fountain. And if you’re wondering about the rest of the Galveston vacation, then...sorry. There was a railroad museum...but it didn’t have very good climate control (i.e. in some rooms that heat was turned on in the middle of summer...that is a no-no) UPDATE 4/20/09: Not too long after our visit, the Mall of the Mainland was hit by Hurricane Ike. Galveston was trashed almost completely (15% of the island does not have power, nearly 8 months later) but according to commenters on this blog and at Labelscar, Mall of the Mainland experienced a small renaissance with new stores opening despite the closure of the Dillard's. Unfortunately, it was short-lived, and now the mall is emptier than ever. One side of the mall is more empty than ever, with JCPenney and Dillard's vacant husks decaying. We do not know what will happen to the mall. However, the stakes are in favor. There are no malls in Galveston anymore (Galvez Mall was demalled in the early 2000s or late 1990s) and the mall in Baytown (San Jacinto Mall) also is in big trouble.
Posted by Pseudo3D at 10:33 PM 9 comments

Over a year ago I closed the doors on Two Way Roads, but I'm reopening it with my latest find: The Tower II Files.

Taken from an archived version of OPENBOOK9003's site, here they are. They're not exported or translated (though work will commence on it soon enough), but this is a major landmark in one of the things Two Way Roads was founded on. Enjoy. 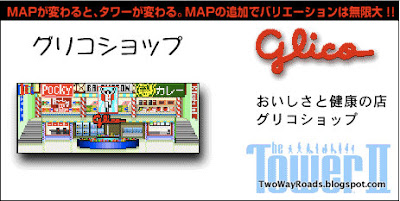 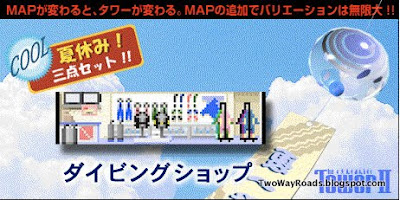 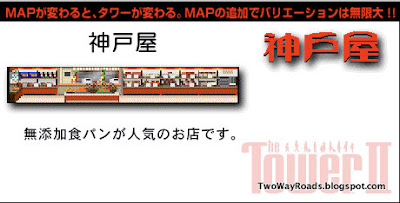 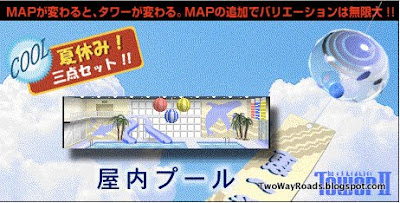 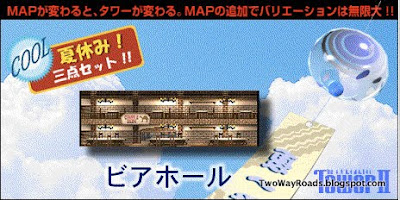 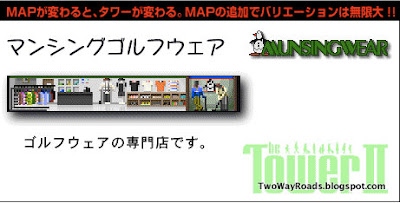 EDIT: As of April 18, 2017, a large part of Two Way Roads has been archived, including the entirety of Spirit of 2005 and some of the posts that would later be part of Brazos Buildings & Businesses.
Posted by Pseudo3D at 9:34 PM 3 comments

Editor's Note: Here's one I prepared in late August. --PS3D

Cyan Worlds (formerly Cyan) is a fairly mysterious company. We talked about Cosmic Osmo months ago, but Cyan Worlds is still an intriguing company.

1. The Mysterious Color Cosmic Osmo
I'm still wondering about the real "color" Cosmic Osmo. A full page is what I remember, and oddly enough, some of the most vivid things (like Queen Osmo, the radio tower) later resurfaced years later when I finally managed to get my hands on a Cosmic Osmo and the Worlds Beyond the Mackerel disk image. I tried visiting the 1997 version of Cyan to get my hands on that elusive page, but the links to the Site Map and Other Worlds was down.

2. Sunsoft
Sunsoft, a Japanese company, helped finance Myst, but Sunsoft's intent was to gain the exclusive rights for consoles. Specifically, the SNES CD-ROM add-on. No real screenshots of what the SNES CD would've looked like, but it's likely that it would look more like the grotesquely underpowered Sega CD. However, while we never saw Myst or Cosmic Osmo on the Super Nintendo, years later, Sunsoft helped bring Myst (and later, "The Manhole: Masterpiece Edition") to the iOS. Was Sunsoft always with Cyan, or did they re-join forces? And if it was the latter, why?

3. Three and Four
We know why Ubisoft is the publisher of the latter Myst series. A deal was inked with Brøderbund, but Brøderbund changed hands, as The Learning Company bought it, Mattel bought The Learning Company, Mattel sold The Learning Company to Gores Technology Group, and the entertainment holdings were sold to Ubisoft...but that doesn't explain why Myst III: Exile and Myst IV: Revelations were not developed by Cyan Worlds. The answer supposedly was that they were working on Uru: Ages Beyond Myst, but that ran into delays, cutbacks, cancellations, and reopenings. Not exactly as intended.

4. That Bad, Huh?
In 2005, Cyan laid off almost everyone and appeared like they would totally die, and was only saved after a deal with Turner Broadcasting and GameTap. But how did Cyan get to that position, anyway? Did they burn through all the cash reserves of original Myst and Riven sales, as well as later Myst licensing that fast? One theory is the changing of hands of Brøderbund's entertainment holdings caused losses for Cyan (Mattel Interactive was a big money-loser) but that's pretty vague. You'd think that the changing hands would allow them to bail out.

Comment Discussion: What are your memories of playing Cyan games?
Posted by Pseudo3D at 10:00 PM 0 comments